In 1972 Blanche Herman became interested in the Ragdoll. In 1973 she bought her first breeding pair from Ann Baker. She paid $ 3500 for the cats. She then had to pay $ 1500 to get into the franchise. So her breeding pair costed $5000. Then she bought 4 more Ragdolls. Her Ragtime cattery was a fact.
In 1974 she met the Daytons. She soon realized that the future of the Ragdoll lay with the Daytons and not with Ann Baker.
She became very active within the Ragdoll Society (now the Ragdoll Fanciers Club). She showed her Ragdolls in various associations suchas CFA, CFF, TICA and ACFA. She worked hard to get the Ragdoll recognized within ACA, ACFA and TICA.
Many of today’s cats still have Ragtime ancestors in their bloodlines.
(Source: Ragdoll Historical Society, History & Development of the Ragdoll Breed, Ragdoll History 1969-1975)

TAKE A PEEK IN THE RAGDOLL HISTORY 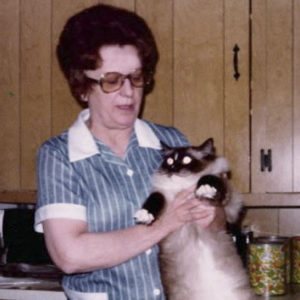